There are a few things I really look forward to every year:

It was this time last summer that Handmade Detroit had the privilege of participating in the first-ever Shadow. We had a great time, and have been devoted fans ever since. Shadow is everything a craft fair should be- lots of people, lots of good times, and, most importantly, lots of great stuff to buy. Take a look at us last year after one too many beers and not enough black bean dip: 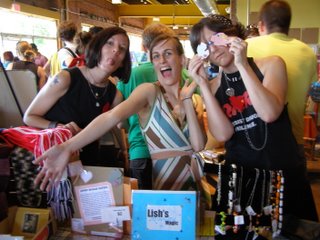 How does one describe the event?

“The first ever Shadow Art Fair, held July 15th, 2006 at the Corner Brewery in Ypsilanti, was a resounding success. We got so much overwhelmingly positive feedback from the over 1,000 people in attendance and the artists involved that we decided to make another one happen before another year went by. Winter Shadow was December 1 and 2, and went completely awesomely. We maxed out the building’s capacity that Friday night…

Like the Winter Shadow, the vendor area will be expanding into the other side of the brewery. This will make it less crowded and allow us to invite new artists. We will also have musical acts performing outside.”This year, Shadow is set for this Saturday, July 14, from noon to 12 p.m in Ypsilanti at the Corner Brewery. Yours truly will be there the whole time helping out at the Handmade Detroit table, and I promise I get funnier as the night gets later. What can you expect this year? Besides all of the great and diverse vendors, you’ve got some great local music to enjoy. Check it out:

Craft fair season is upon us. (The DUCF is only WEEKS away, people!) Get into the spirit by checking out Shadow this weekend. I promise to tell you a funny joke anytime after 9 p.m…