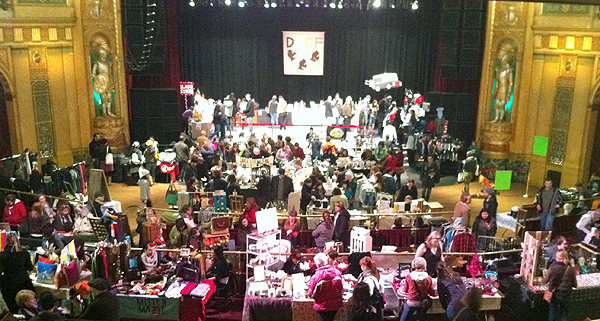 We don’t think we could’ve have said it any better ourselves … here’s what some of our shoppers had to say about this year’s Detroit Urban Craft Fair:

The Fillmore was packed full of crafty goodness – like Etsy in real life!

… held at the Fillmore in downtown Detroit. It’s a beautiful theatre with painted freezes …

Hit up the Detroit Urban Craft Fair this weekend. Awesome, as usual!

I Think I Love You Michigan

It was Robocop who originally caught our eye…

I saw some nice bike products at the Detroit Urban Craft Fair.

and some of our vendors:

I had a bang up first day at DUCF, it pretty much obliterated my stock of well … everything.

… a craft fair is like a marathon. it’s crazy preparing to get there, and then when it’s all over …

… the venue — the Fillmore Theater — was spectacular …

.. .all of the amazing vendors – you all are seriously inspiring …

and the press too!

Checking out the Detroit Urban Craft Fair, and the beautiful Palms/State/Fillmore theater

DUCF as it is affectionately called is a showcase of talented makers and the materials they bring to life.

Thanks for all your kind, crafty words guys!