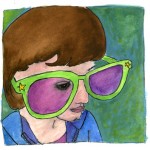 Welcome to a new, occasional feature on Handmade Detroit: the Local Profile. Artists, makers, crafters — we got the skinny on people making fun stuff around here.

First up is illustrator Angela Duncan. If you’re wondering about the woman who designed our hand-drawn Craft Revival poster — well, wonder no more! All the juicy, funny, colorful details are just after the jump. 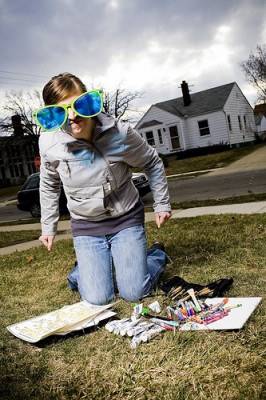 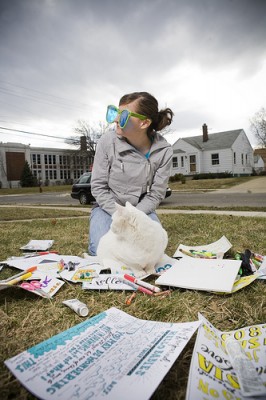 If you’re a shopper at Trader Joe’s in Royal Oak you may recognize Angela’s work from the handmade displays she designs and makes for the store. {Those cute, over-sized sweethearts hung around the store for Valentine’s Day? Totally her.}

Outside the store, she is busy hand-drawning album covers, posters and other projects for labels like Suburban Sprawl. In person, she’s energetic and playful — words you could also use to describe her colorful designs. She was kind enough to “A” some of our “Q”s — which is where the whole profile part comes in — and they follow this sentence.

AD: Stacks of money! No, just regular desk-y stuff. A little iBook, a monitor, scanner, hard drive, a bunch of pens and paper, cold coffee. And a little pink bunny to keep me company.

How did you get started with illustrating? 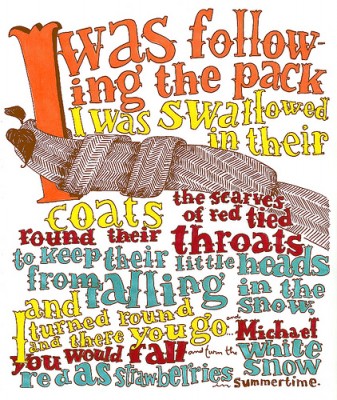 I’ve always done it for fun. A few years ago, I started putting things up on the internet. That’s the best. I made new friends by sending out surprise album artwork, and eventually, nice people started asking me to do posters and things for their shows.

Did you go to school?

Oh yes, I went to a great preschool in the basement of a library in Beulah, Michigan. We made pinecones covered in peanut butter and birdseed. I started Pre-Med at Michigan State University, and finished with a Bachelor’s in Advertising. It took a while, but eventually I realized I just want to draw and make stuff.

Who or what inspires you?

People who get things done! People who are not afraid of success. People who are funny. Also, great illustration, pop culture, music, church stuff, my hometown, my friends and sunshine. Cheesy stuff.

Who are your favorite illustrators?

Ray Fenwick wins, but I also go nuts over work by Mike Perry, Brandon Bird, David Fullarton, Craig Thompson and Phil McAndrew. Their work is raw and hilarious, and plays off of pop culture. Also, my dad. His stuff is off the chain.

What is your favorite project that you’ve worked on?

A big secret project, where a friend asked me to draw a life-size illustration of him as a joke-gift for his girlfriend. Shh! But I’m having a real good time with a project for friends at Found/Quack/Suburban Sprawl, among other awesome things. All of my projects have been fun, though. It’s a luxury to do this for a living.

A lot of your work is focused on hand-drawn type, why is that?

It’s just the most exciting thing. I used to write ad copy, but realized I don’t like to write nearly as much as I love to draw words. Also, being artist at Trader Joe’s involves doing a whole lot of hand-drawn type. I’m very lucky to get lots of practice!

What are some of your favorite design, art or handmade websites?

Anything else you’d like to say?
Thanks! See you guys at the Craft Revival. 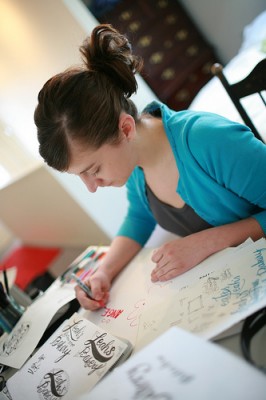 Check out more of Angela’s work on her website theangeladuncan.com
or on her Flickr. She will also be selling work at Craft Revival, 10-5, April 18 @ the Magic Stick. Portraits by Philip Southern.